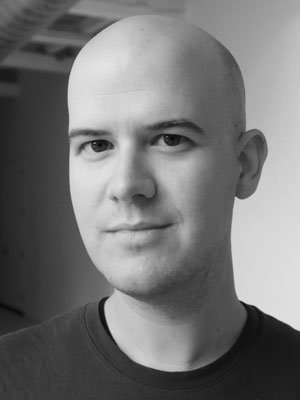 Three time Grammy® Award-winning bass, Cameron Beauchamp, is active throughout the country as a soloist, chamber musician, clinician, and experimental artist. Cameron is an original member and Co-Artistic Director of Roomful of Teeth, and also the Artistic Director of Austin-based Convergence.

An untethered rascal of the 1980’s – Cameron always wanted to be Indiana Jones or a rock n’ roll star.

When his voice changed overnight in 5th grade, his music teacher told him he didn’t have to sing anymore, because his voice was too low. He then picked up a trombone and began playing in San Antonio’s thriving 1990’s jazz, ska and rockabilly scene. Cameron spent 8 years avoiding going to class (at the University of North Texas), while working in the diverse musical landscape of Dallas. Eventually he met a girl, finished school and moved to Boston with his gal and his best friends. When a lucrative opera gig got cancelled in Boston, he got wind of a new group being formed called Roomful of Teeth. Finally something that he could hitch his wagon to. So he did.

He has performed on Grammy® Award-winning albums with Roomful of Teeth, Silk Road Ensemble and Conspirare, nine Grammy® nominated albums, and one Downbeat Award-winning album. When Cameron is not making music, he passionately lives his life as a husband and father in San Antonio, TX, where he polishes his cowboy boots and dreams of a cure for type 1 diabetes.