Conspirare performed for 2,025 attendees for the interment of Matthew Shepard’s ashes at Washington National Cathedral on October 26. Conductor Craig Hella Johnson led Conspirare’s choir of 34 singers and eight instrumentalists. Conspirare performed selections from Considering Matthew Shepard during the service and a suite of movements from the work as part of a postlude meant to create a space for healing and reflection.  In a poignant moment, Bishop Gene Robinson embraced Johnson during the postlude and offered warm and robust gratitude for the significant role Conspirare played in the service. Conspirare donors from around the country underwrote the appearance, with over 400 generous donors, including many first-time donors, making contributions. 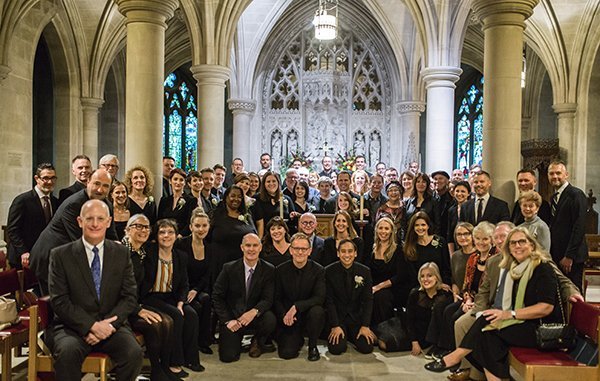 Baritone Charles Wesley Evans, opened the service postlude with “Shall We Gather at the River,” and said “I am so grateful to have been a part of this beautiful tribute and service of remembrance for Matthew.  I’m still spinning emotionally from this amazing month of sharing his story around the country with my unbelievably talented friends and celebrating his life in Considering Matthew Shepard.  So much work left to do, but, Dennis, Judy and Logan Shepard have helped pave the way in Matthew’s name. They deserved our best.  May his spirit soar!”  Soprano Kathlene Ritch, who captivated attendees with solos in “Meet Me Here,” “Ordinary Boy,” and “Light of a Clear Blue Morning,” reflected that “After performing CMS [Considering Matthew Shepard] in Laramie on the 20th anniversary of the actual day of this tragic event, it felt like such a blessing (and a sense of closure) to be able to sing for Matt’s interment. I knew it would be a moving service, but to have all of the elements combined- including Bishop Robinson’s healing words- I will never forget it.”

Over 25 Conspirare patrons traveled to Washington D.C. from states including Texas, Oregon, and Ohio to hear Conspirare. In Austin, Chief Development Officer Marianne DeLeon hosted an Austin viewing party attended by 20 people. Thousands more participated via the livestream.  Helen Hays reminisced that “Even thinking about the amazing Service of Thanksgiving and Remembrance for Matthew Shepard brings tears to my eyes. I cherish the memory of the very diverse congregation, the powerful words of Bishop Gene Robinson, the wonderful feeling of inclusiveness and most of all the music. Conspirare’s offering of portions of the Considering Matthew Shepard oratorio and the beautiful and poignant choral postlude were transcendent.”

The service was covered by numerous national and international news stations. Notable Conspirare mentions include:

All of the music performed by Conspirare is available on CD and in streaming formats.

Light of a Clear Blue Morning from Conspirare: A Company of Voice

Walk Together, Children from Sing Freedom!

Hal Leonard recently released the CMS piano-vocal score. Choirs around the country are already beginning to schedule performances. The free-standing “All of Us” has been sung by thousands with Conspirare and as part of choral concerts across the United States. JW Pepper featured CMS on a blog called Performing Social Justice Pieces: Considering Matthew Shepard.