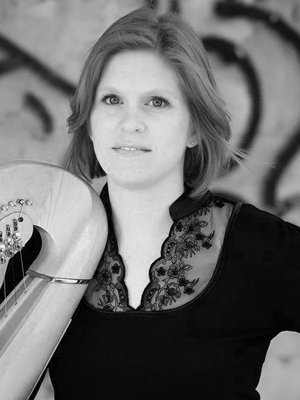 Playing the harp for Dr. Jacquelyn Venter is more than just being an active performer and teacher, it is her way of life. “I can say things with my harp that I may not always be able to articulate with words. When I don’t play for a while, I feel like my emotional balance is off – playing and practicing can help me process through what is going on in my life – which often serves the music.”

While ballerinas captivate most five-year-old girls watching a performance of the Nutcracker, it was the harpist who enthralled Dr. Venter. From that moment on, playing the harp was her pursuit, beginning with the piano and moving onto the harp at age nine.

Dr. Venter says teaching and performing is also about sharing the gifts she has been given: “Impacting others through this instrument I love is extremely rewarding – whether it’s through a performance or watching a student grow and learn.”

She received her Doctorate of Musical Arts from the University of Texas at Austin. She has since relocated to Sacramento, California to continue her career. Dr. Venter has been featured as a guest-artist with the Grammy®-nominated choir ensemble, Conspirare. The album Samuel Barber: an American Romantic debuted at number ten on the Billboard Charts. While receiving her doctorate, she was Director of the Young Texas Harp Ensemble. This exclusive harp ensemble, for middle school and high school harpists, is invited to play throughout Texas, including at the 2012 Texas Music Educators Association Conference. Prior to achieving her doctorate, Dr. Venter had an active career in Iowa. She was Principal Harpist for the Waterloo/Cedar Falls Symphony, performed with the Cedar Rapids Symphony, the Dubuque Symphony Orchestra, South East Iowa Symphony Orchestra, and the Central Iowa Symphony. In 2004 and 2009 she was a featured soloist at the Crème de la Crème Benefit Concert for the Gallagher Bluedorn Performing Arts Center, an annual-fundraiser concert to support programming for the center and showcasing local talent. Her 2009 performance was highly praised and reviewed as, “lovely, meditative and exquisitely played.”

Dr. Venter has an extensive teaching career that includes; instructor at Luther College, the UNI Suzuki School, and for the University of Texas String Project. She received her Bachelor of Music in harp performance from the Oberlin Conservatory of Music under Yolanda Kondonassis, her Master of Music Degree in harp performance from the University of Northern Iowa with Gretchen Brumwell, and her Doctorate of Musical Arts from the University of Texas at Austin under Delaine Fedson Leonard. During her years at Oberlin she also studied at the legendary Salzedo Summer Harp Colony in Camden, Maine under Alice Chalifoux. Her first harp teacher was Mary Beckman in Waterloo, IA.