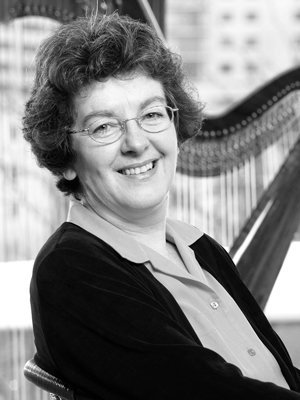 Oregon native Kathy Kienzle joined the Minnesota Orchestra in 1993 as acting principal harp and now serves as principal harp. A frequent soloist with the Orchestra, she gave the world premiere of Einojuhani Rautavaara’s Harp Concerto at Orchestra Hall in 2000 and repeated the performance in Tampere, Finland. Kienzle premiered another major work, Lowell Liebermann’s Concerto for Flute and Harp, with James Galway and the Orchestra in 1995. She performed Debussy’s Sacred and Profane Dances at Orchestra concerts in 2005 and 2008; in 2010 she performed Mozart’s Concerto for Flute and Harp with Orchestra member Wendy Williams. Kienzle has also appeared on the Orchestra’s chamber music series; in 2011 she performed Takemitsu’s And then I knew ’twas Wind and Andrès’ Chants d’arrière-saison.

In 2014 Kienzle had a particularly busy summer. She became a Suzuki harp teacher trainer; and with flutist Michelle Frisch, a frequent collaborator, she performed both in New Orleans, at the American Harp Society national conference, and in Sydney, Australia, at the World Harp Congress, where she was elected chair of that organization’s board of directors.

Kienzle has been affiliated with the Saint Paul Chamber Orchestra, Minnesota Opera, Oregon Bach Festival and Peninsula Music Festival in Door County, Wisconsin. She has served on the faculties of Bethel and Macalester Colleges, the University of Kansas, the University of St. Thomas and the College of St. Catherine. Kienzle currently serves on the faculties of the University of Minnesota’s School of Music and Augsburg College and with a colleague has a private teaching studio, Studio Fidicina, in south Minneapolis. Kienzle has recorded 5 albums with the renowned Dale Warland Singers. Many of these recordings include premieres of works by Stephen Paulus. She also appears on the recording of the oratorio “To Be Certain of the Dawn” by Paulus and Michael Dennis Browne, with the Minnesota Orchestra. Among her recordings are three made with Michele Frisch: O Bell’ Alma: Music from the Opera, La Belle Vie: French Opera Fantasie and Bella Danza: Music of the Dance.

Kienzle studied with Marcel Grandjany, Susann McDonald and Susanna Milldonia, and earned a bachelor of music degree from the Juilliard School and a master’s degree from the University of Arizona. She placed third in the Sixth International Harp Competition in Jerusalem, won second place in the American Harp Society National Competition (Young Professional Division) in 1969, and received a 1991 Minnesota State Arts Board Individual Artist Fellowship.