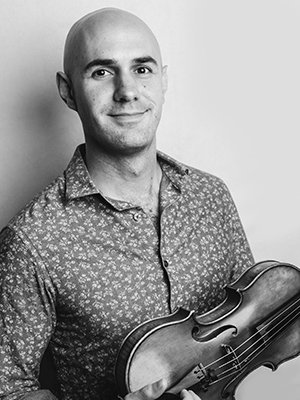 Hailed by the Washington Post as a performer with “no-fail agility,” Nick Montopoli is one of the most versatile musicians in the Austin area, with performance, studio, and composition experience over a wide range of genres and instruments.

Nick is a founding member of Invoke, a folk-infused quartet whose repertoire features original compositions by the group and works by exciting young American composers. Invoke won First Prize at the 2018 M-Prize and Coltman competitions, and at the 2015 Savvy Musician in ACTION competition. The group has been selected as Young Professional String Quartet in Residence at the University of Texas, Artists in Residence at Strathmore, Wintergreen Performing Arts Fellowship Quartet, and has held residency positions at institutions around the country, including the University of South Carolina, Interlochen, and the University of Maryland.

Nick’s performance highlights include sharing the stage with members of Orpheus, Eighth Blackbird, and the St. Lawrence String Quartet. He is the Concertmaster of the Central Texas Philharmonic, and has also appeared with numerous local ensembles, including Tetractys and Density512. Nick’s performances, compositions, and arrangements can be heard on records by Chris Brown, Ruut, Invoke, Marian McLaughlin, and more.

In addition to his session work and performance schedule, Nick records, arranges, and produces from his home studio in Austin. He also works for acclaimed composer Graham Reynolds as composer assistant.