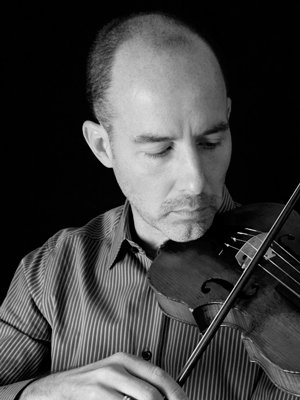 Violinist Stephen Redfield is concertmaster of the Santa Fe Pro Musica, and each summer plays with the Victoria Bach Festival where his performances as concertmaster and soloist have been produced on discs and broadcast nationally. He is a long-standing participant in the Oregon Bach Festival, often featured as concertmaster and in chamber music and participating in numerous recordings, including the Grammy Award-winning disc Credo. Stephen is also concertmaster of the Arizona Bach Festival. Stephen is Associate Professor of Violin at the University of Southern Mississippi School of Music faculty and performs with the Mississippi Chamber Circle and the Impromptu Piano Quartet. He took this position in 1996 after six years as a part-time instructor at Texas State University. Stephen’s many students have won distinction in competitions, as performers, and as educators, and have been appointed to orchestral and teaching positions throughout the country and in Latin America.

Stephen’s own teachers were Dorothy DeLay at the Cincinnati College-Conservatory of Music, Donald Weilerstein at the Eastman School, and Leonard Posner at the University of Texas at Austin where he earned the doctorate. His dissertation is on the late 18th-century Keyboard and Violin Sonatas of Vicenzo Orgitano. Through his research in this area, Stephen developed a specialization in period performance. He has studied Baroque violin with Lucy van Dael and Elizabeth Blumenstock and performs regularly as a Baroque violinist.

Stephen has often been featured as a soloist with orchestra, sometimes acting as the ensemble’s leader. During 2009, Mendelssohn’s 200th birth-year, he performed Mendelssohn’s two violin concertos and took his three sonatas on tour. In addition to his activity as a a soloist, Stephen has performed internationally as a chamber musician, collaborating with the artists Andre-Michel Schub, Peter Wiley and Mark Peskanov. Devoted to chamber music since his youth, Stephen’s college quartet won top prizes in the Coleman and Monterey Chamber Music competitions. Stephen’s Baroque chamber music credits include concerts with Marion Verbruggen, Mary Springfels, Elizabeth Blumenstock and Ken Slowik. As a member of the Sebastian Ensemble with harpsichordist Kathleen McIntosh, Stephen has travelled twice to Lima, Peru, for the Festival Internacional de Música Antigua‏. Specializing in J.S. Bach’s Sonatas for Violin and Harpsichord Obligato, this period performance group has toured throughout the United States as well as in Spain, Japan and Cuba.

On leave 2011-12 from his university post, Stephen was Chair of the Department of Music at the New Mexico School for the Arts in Santa Fe. He helped to establish and develop the music program’s curriculum and educational vision for this groundbreaking school, providing mastery arts education for high school students from all across New Mexico. While at the school, he also led the String Orchestra and taught violin and chamber music. Since then Stephen has returned to his friends and colleagues in Hattiesburg, Mississippi where he has resumed teaching and his part-time activity mounting exhibitions for a recurring civic art event, the Downtown ArtWalk. His 1925 building, long known as the Walnut St. Pharmacy, was converted into a combination art gallery and living space by his partner, Robert Gonzalez. This intense interaction with visual artists, requiring him to reach outside music, has been a deeply enriching experience on many levels.