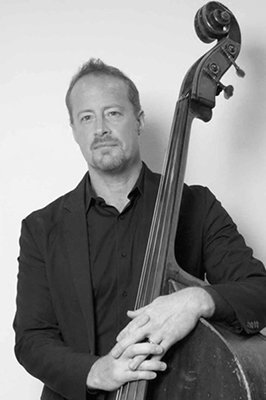 Dr. Utah Hamrick is a jazz educator who holds a Bachelors in Music Education and Masters in Bass Performance from Central Michigan University and a DMA in Jazz Performance from the University of Texas. He joined Texas State School of Music faculty in the fall of 2015 as the director of the Jazz Ensemble and Jazz Lab Band, as well as jazz bass instructor. For the previous ten years Dr. Hamrick was on faculty at the University of Texas at San Antonio, where he directed the jazz ensemble and combos and taught jazz history and improvisation. Under his direction, the jazz ensemble received numerous recognitions and awards, including Outstanding Collegiate Band at the Sam Houston State Jazz Festival, straight I-ratings at the University of Northern Colorado Jazz Festival, and an invitation to perform at the TMEA conference.

Dr. Hamrick frequently performs with Austin-based composer Graham Reynolds, including on the motion picture soundtracks for Bernie and All is Bright.  He has performed with jazz luminaries such as Houston Person, Byron Stripling, Larry Ham, Bill Watrous, and Tommy Igoe, and performed with Willie Nelson for the opening of the ACL Live Moody Theater. He can also be heard on the JazzBonez 2014 release Watch it! on Summit records and the  animated short The OceanMaker.